Snow Dragon has had a lot of attention over the winter in Lunenburg. On top of the usual maintenance of playing never ending catch up with interior paint and varnish. She was surveyed, refitted with a new radar, GPS compass, 3 bladed prop, forward looking depth sounder and a second autopilot. To top it off Snow Dragon also had to have her winches and engine rebuilt. 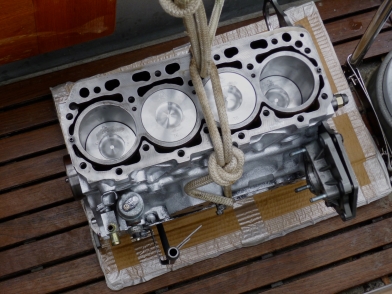 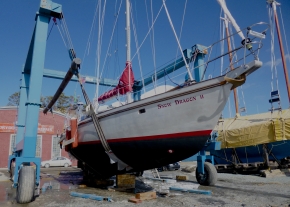 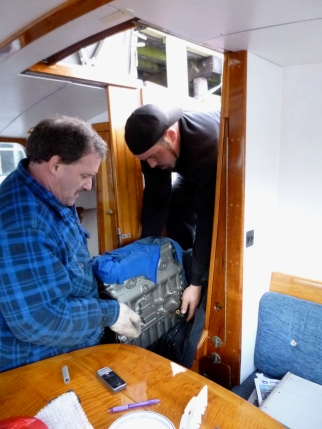 To make the things even more interesting, Frances slipped on ice and broke her right wrist, at the crucial point were she was already fully committed to the above projects, most of which she had planned to do herself. An ambulance ride and a few doctor’s appointments later Frances was back onboard doing what she could with her left hand and relying on friends and complete strangers to do two handed tasks like zip up her jacket.

Normally I would have been around to take the load off but I was away in England taking a travel writing course that I had committed to months before we decided to put on the various pieces of new equipment.

It didn’t make economic sense for me to fly back to Nova Scotia and Frances promised me she would look after he wrist properly and find someone to help her work on Snow Dragon. Our friends in Lunenburg were a great support system and Frances made new friends along the way.

A few days before she joined me in England to visit her parents and get ready for her arctic watercolor exhibition. I got an email from the boat yard with pictures of one of the guys removing Frances’ cast with a FEIN Multimaster. Turned out she had tried to remove it herself with her left hand but her blade was dull. I can’t say I was surprised but I shook my head never the less. When I asked her why she didn’t wait and have it done at the hospital she replied, “I would trust Covey Island Boat Works to work on my boat so why not let them remove my cast?”.

Frances promptly went to a physiotherapist in Lunenburg who pronounced her wrist fine and said she could resume normal activity. When Frances replied, “great, I can start hammering”. The physio shook his head and laughed, realizing his definition of “normal activity” and Frances’ differed considerably. 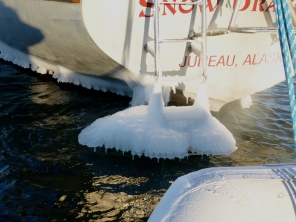 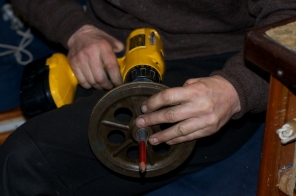